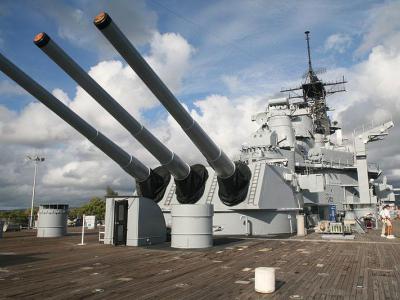 The USS Missouri is the last battleship built by the U.S. Navy, and was the site of the official end of World War II. It was on this ship Japan officially signed the surrender document on September 2, 1945.

The USS Missouri was commissioned in 1944, and fought in both the battles of Iwo Jima and Okinawa, in the Korean War between the years 1950 and 1953, and then in Operation Desert Storm in 1991. All told, the Missouri received a total of eleven service stars before being decommissioned in 1992. In 1998, the ship was donated to the USS Missouri Memorial Association for use as a museum ship. One of the ship's trademarks is her nine 16-inch guns. The barrel of each one is roughly 67 feet long and weighs over 115 tons.

Why You Should Visit:
Symbolism aside, it is quite interesting to see a WWII-era battleship that was modernized in the 1980s. This ship truly has one of the most unique stories in all of the U.S. Navy.

Tip:
If you purchase tickets online, make sure you go to the Visitor Center before entering. You need to show the receipt that you can only get from the Visitor Center when you board.
Shuttle to Ford Island and the site is free and takes about 10 mins. Shuttles arrive every 10-15 mins, so there's no need to panic if you miss one.