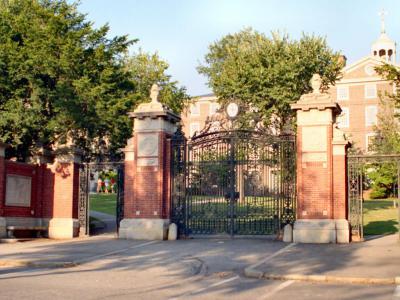 The Van Wickle Gates form the ornamental entrance to Brown University's main campus in Providence. The gates stand at the intersection of College Street and Prospect Street at the crest of College Hill. Dedicated on June 18, 1901, they stand as a symbol for the campus and its 251-year history.

The gates were built with the bequest of Augustus Stout Van Wickle (Class of 1876, d. 1898), who was the president of a bank and several coal corporations. Van Wickle also provided for the construction of a set of gates at Princeton University: the 1905 FitzRandolph Gate.

Designed by architects Hoppin & Ely and Hoppin & Koen, the gates are constructed of wrought iron, with brick and stone piers. The larger main gate is flanked by two smaller side gates. The top of the gate is crowned with the Brown University coat of arms while the two piers are decorated with the seals of Rhode Island and Providence. The sides of the gates feature inscriptions by Cicero.

The gates, along with an adjacent building financed by Van Wickle, were dedicated on Tuesday June 18, 1901.

The smaller two side gates remain open throughout the year, while the larger center gates usually remain closed. These gates are opened for three annual occasions. At the beginning of the academic year and the beginning of the Spring semester, the center gates open inward to admit students during Convocation and Mid-Year Convocation. At the end of the second semester, the gates open outward for the Commencement Day procession.

Campus superstition holds that students who pass through the center gate more than twice will not graduate. Members of groups like the Brown University Band, who regularly pass through the gates avoid the purported curse by hopping on one foot and entering the gates backwards.
Image by Will Hart on Flickr under Creative Commons License.
Sight description based on wikipedia