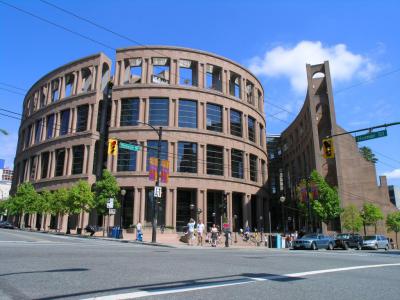 The Vancouver Public Library is more than an average public library. When the city of Vancouver looked to build a public library in 1990, they solicited several different designs to be voted on. The winner was a somewhat nontraditional design by Moshe Safdie, featuring a rectangular area for the library itself, surrounded by a dramatic, elliptical wall.

The library portion lies within a seven-story rectangle which contains all of the actual library materials, including books, periodicals, and other references. Encircling it is a colonnaded wall, where study areas and reading rooms are connected by bridges punctuated with light wells. The building sits directly across the street from The Center in Vancouver for the Performing Arts, which Safdie was commissioned to design as a compliment to the library.

This building has been featured in several movies and TV shows over the years. The cloning company in The 6th Day was headquartered in the library's Central Branch. Scenes from The Imaginarium of Dr. Parnassus were filmed in the entrance hall of the Central Branch, too. Several scenes from the sci-fi shows Battlestar Galactica and Caprica were also filmed in various areas of the library.

Why You Should Visit:
If you're a literature or architecture fan, and have a taste for sound urban design, you will love this place.
If you appreciate free activities and services, or simply seek out things to do on a rainy day, you will love this library just as well.
In addition to the newly-opened rooftop garden, the two upper floors (8th/9th), which were previously leased out, have been tastefully renovated.

Tip:
While escalators and elevators help deliver you quickly to your destination, the trip up the levels is worth it to see how the floor plans differ and merge into open spaces.