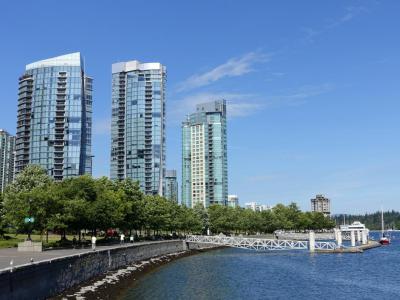 The Vancouver seawall is a stone wall that was constructed around the perimeter of Stanley Park to prevent erosion of the park's foreshore. Colloquially, the term also denotes the pedestrian, bicycle, and rollerblading pathway on the seawall, one which has been extended far outside the boundaries of Stanley Park and which has become one of the most-used features of the park by both locals and tourists.

James "Jimmy" Cunningham, a master mason, dedicated much of his life – from 1931 until his retirement in 1963 – to the construction of the seawall. Even after he had retired, Cunningham continued to return to monitor the wall's progress, up until his death at age of 85. While the whole path is not built upon the seawall; the total distance from CRAB park, around Stanley Park and False Creek to Spanish Banks is about 30 kilometres (19 miles).

Despite perennial conflicts between pedestrians, cyclists, and inline skaters, park users consider the seawall to be the most important feature of Stanley Park and it is the most used feature within the park.
Image Courtesy of Wikimedia and Daderot.
Sight description based on Wikipedia.