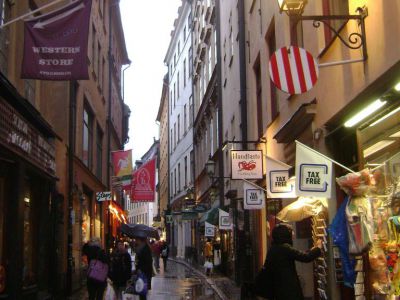 Today renowned as one of Gamla Stan's most picturesque and busiest tourist magnets, Västerlånggatan was for many centuries one of the main streets in Stockholm, together with Österlånggatan, both running outside the city walls. During the 15th century, they were collectively called Allmänningsgatan ("The Common Street") or Långa gatan ("The long street"). The current name Västerlånggatan ("the Western Long Street") was officially coined in 1885.

Originally, the street was little more than a pathway following the shoreline, linking the northern city gate, Norrbro, with the southern, Söderbro. In the 15th century, it became a high-traffic paved artery road with dwellings and shops on both sides. During the Middle Ages and the Vasa era, the southern part of the street formed part of the district centered on Järntorget, inhabited by influential merchants. Along the rest of the street, craftsmen had their small workshops, and the northernmost section, stretching between Mynttorget and Storkyrkobrinken, was called Stadssmedjegatan ("City's Smith's Street"), because the blacksmiths and coppersmiths had their shops here, confined outside the city limits due to the risk of fire. In the 17th century, this section was inhabited by goldsmiths which added to its prestige.

Starting the mid 19th century, the medieval street facades were transformed to the taste of the day; plaster ornaments and cast iron colonettes mail-ordered from Germany replaced the medieval fronts, resulting in the large shop windows usually displaying some well-preserved interiors.

Throughout the second half of the 20th century, the street scene began to change amid revitalization in its business district, seeing hotels, high-end businesses and restaurants moving in and many old shops, after more than 250 years in business, moving out, forced to relocate or shut down by soaring rents, subsequently replaced by more or less fitting successors marketing tourist-oriented gewgaws.

Today, Swedes and tourists alike love to mingle among the local boutiques, medieval gables and later additions, the street thus preserving its old ways — offering its musicians to Stockholmers hurrying to work in the morning; blustering pub-crawlers still vexing stoic dwellers, and the old forged iron signs continuing to ignore the neon signs still tempting passers-by with all sorts of gadgets.
Image by Albert Jankowski on Wikimedia under Creative Commons License.
Sight description based on wikipedia