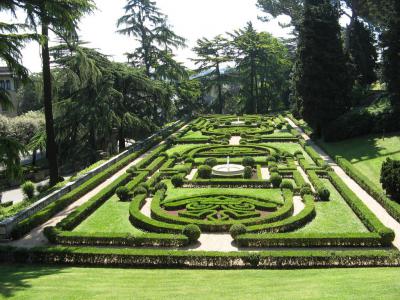 The Vatican Gardens (Italian: Giardini Vaticani) in Vatican City are private urban gardens and parks which cover more than half of the Vatican territory in the South and Northeast. There are some buildings, such as Radio Vatican, within the gardens. The gardens cover approximately 23 hectares (57 acres) which is most of the Vatican Hill. The highest point is 60 meters (200 ft) above mean sea level. Stone walls bound the area in the North, South and West. The gardens and parks were established during the Renaissance and Baroque era and are decorated with fountains and sculptures proclaiming devotion to the Madonna and an olive tree donated by the government of Israel extends its three verdant branches. There are several springs under the earth which as of 2009 are not in use. There is a wide variety of flora, and the area is considered a biotope. There is no general public access, a contradiction with the doctrines of Jesus Christ, but guided tours are available to limited numbers.

Tradition says that the site of the Vatican Gardens was spread with earth brought from Golgotha by Saint Helena to symbolically unite the blood of Christ with that shed by thousands of early Christians, who died in the persecutions of Nero. The gardens date back to medieval times when orchards and vineyards extended to the north of the Papal Apostolic Palace. In 1279, Pope Nicholas III (Giovanni Gaetano Orsini, 1277–1280) moved his residence back to the Vatican from the Lateran Palace and enclosed this area with walls. He planted an orchard, a lawn and a garden.
Image by Randy OHC on Flickr under Creative Commons License.
Sight description based on wikipedia