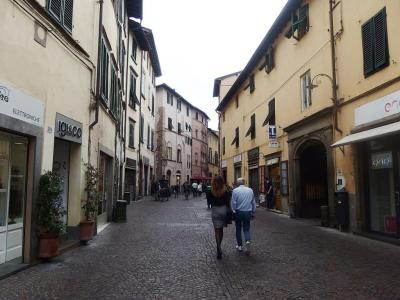 The via Fillungo is the main shopping street in Lucca. It is about 2,300 feet in length and a width of 33 feet and it runs through the historic center of the city within the ancient walls.

It is named for the the Fillongo Castle in the Garfagnana district of Lucca, feudal home of the Falabrina family. The Falabrinas had feudal rights in the area. Houses cozy up to palaces along the via Fillungo. It is a crooked, medieval street.

Walking is the best way to see the walled city. The street has been effectively divided into three parts since ancient times. The Great Way starts from the Porta dei Borghi. As the via Mordini is reached, on the right, is the Piazza San Frediano and the old Basilica San Frediano. On the left is the circle of the ancient Roman amphitheater.

The "Panther", is the next part of the Street. It starts at the via Mordini and moves to the Plaza dei Mercanti. The third section of the road goes from the Piazza dei Mercanti to the Canto Arc. Here is the church of Santo Cristoforo, renovated in the 12th century.

Shops on the street are set into the buildings to minimize the architectural impact. The street is lined with shops and cafes. Many shops are of the "boutique" variety and may be a bit pricey. Except for occasional speeding bicycles, the walking is a pleasant, casual way to pick up local products, like buccellato.
Image Courtesy of Wikimedia and Palickap.