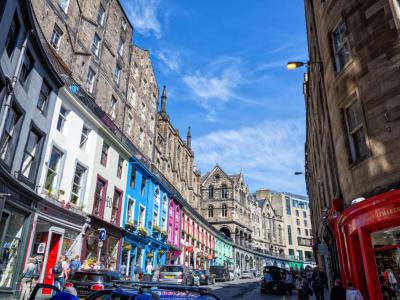 Perhaps one of the most photographed locations in Edinburgh, Victoria Street in the Old Town, gently curved and adorned with colourful shopfronts, is indeed a much loved spot for tourist photos, postcards and TV adverts.

Built between 1829 and 1834, this street is the brainchild of architect Thomas Hamilton, the one who masterminded Edinburgh’s network of neo-classical wonders. On this occasion, though, he deviated from his habitual neo-classical stamp, being ordered to create architecture mimicking the Old Flemish style. For this purpose, many of the medieval buildings were torn down, while the notable arches, lining the new terrace, were turned into shops.

Lately, Victoria Street and the West Bow have had a certain amount of notoriety attached to them as possible prototypes for Diagon Alley, the wizards' market, featured in the Harry Potter books.

As the home base of JK Rowling, author of the Harry Potter books, Edinburgh is famed as a Potter pilgrimage destination. Packed with the higgledy piggledy medley of vibrant buildings, shops of all sizes and descriptions, noteworthy arches, cobblestones and general air of eccentricity, it’s no wonder that Victoria Street is seen as an inspiration for the ever-so fabulous Diagon Alley after all.
Image by Gary Campbell-Hall on Wikimedia under Creative Commons License.