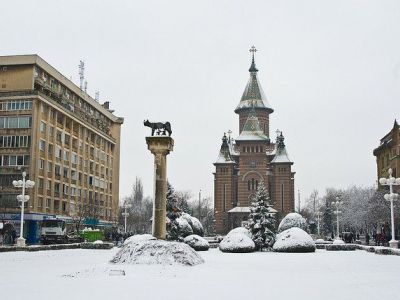 Victory Square, formerly Opera Square, is the place where Timisoara was proclaimed the first independent city in Romania on the 20th of December, 1989. At the opposite poles of the square one will find in the north - the Opera House and in the south - the Metropolitan Cathedral. The center of the square is decorated with monuments, such as “Lupoaica cu puii”, which is a replica of Lupa Capitolina; the monument was Rome’s gift for Timisoara in 1926. Another landmark located in Victory Square is the Artesian Fountain, also known as the Fountain with Fish, in the shape of a star with 5 corners. It was built in 1957.
Image Courtesy of Flickr and thenoizz.