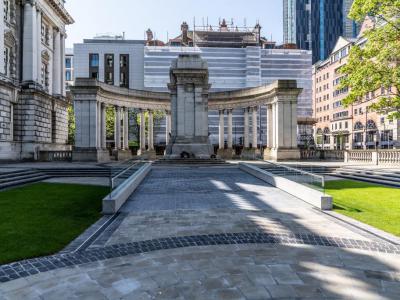 Vancouver's Victory Square is a small urban park, located on the site of the old Vancouver courthouse. The park itself is notable for accidentally setting the great Vancouver fire - when the heavily forested land was cleared to make way for the courthouse, a pile of trees and branches built up. This wood pile acted as kindling for the great fire, which levelled much of Vancouver in 1886.

One of the square's key features is the Cenotaph. The Victory Square Cenotaph is a war memorial, carved from Nelson Island granite and standing roughly 30 feet in height. It is engraved with an image of a longsword, a wreath of laurels, and a wreath of poppies, both of which are entwined with maple leaves. Biblical inscriptions on the Cenotaph read, “Their name liveth forevermore,” “Is it nothing to you,” and “All ye that pass by.”

The location of the Cenotaph is historically significant, since the monument was erected where the base of the steps of the old courthouse used to be. This was where men stood to sign up for World War I, and where the main presentations of royal visits to Vancouver took place. Every year, the Cenotaph is the center of Vancouver's Remembrance Day services.
Image Courtesy of Flickr and William Murphy.