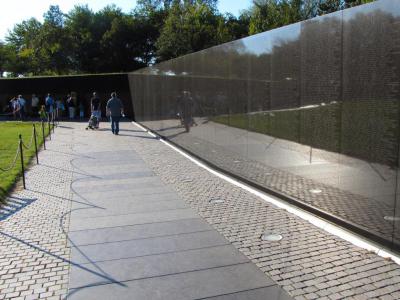 The U.S. involvement in Vietnam began in 1959. The last US serviceman died in Vietnam on May 15, 1975. Throughout this time the country had varying degrees of support for the war. One of the precepts of the VVM was to not let any of the controversy mar the honoring of the service men and women who served during that time. Even though the memorial itself has had some controversy, time is healing the wounds. The somber reflecting wall with all the names etched into stone lets visitors to the VVM focus on the sacrifice that has been made. There are currently 58,267 names listed on the wall of service personnel that was either killed or missing in action. There are no civilian names listed on The Wall.

The Vietnam Women’s Memorial is situated just south of The Wall. It shows three uniformed women helping a wounded soldier. The women’s names are Faith, Hope, and Charity. A total of 67 women died during the Vietnam War – 8 were servicewomen, and 59 were civilians in a support role.

The Three Soldiers portion of the VVM was created amid the controversy that surrounded The Wall. Some members of Congress wanted a more traditional memorial. The bronze statues of the service members depict soldiers wearing the common gear of the Vietnam War. They are positioned so they are looking at the names on The Wall.

The VVM is open 24 hours a day with rangers available to answer questions from 9:30am to 11:30pm. There are directories at the entrance to The Wall to help you find a specific name. There are also several websites that list the names on The Wall.

Why You Should Visit:
The gravity of the Vietnam War is not truly understood until you see all the names etched for eternity on the memorial's wall.

Tip:
Do it on a clear day if you can. On a wet day, there is nowhere much to shelter.
If you want unobstructed photographs or more peaceful, quiet visits, it is best to visit very early in the morning, just after daybreak.
Image Courtesy of Flickr and Prayitno.
Sight description based on Wikipedia.