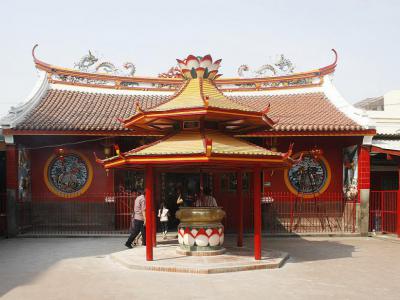 Religious center dedicated to Kwan Im (Goddess of Mercy), Vihara Dharma Bhakti is considered to be the oldest Buddhist temple in Jakarta. Similar in design to Petak Sembilan, another highly praised Chinese temple, the Dharma Bhakti was built in 1650. In the mid-18th century the temple was completely raked because of a large fire, but it was rebuilt 5 years later, in 1755.

Today, Vihara Dharma Bhakti is home to 18 Buddhist monks and represents a hot spot on Jakarta’s spiritual map. Buddhists, Confucians and Taoists share the temple and bring their offerings on a daily basis, finding their way through golden and red deity sculptures and effigies.

The temple is decorated in vibrant colors, with red and yellow being predominant. A strong smell of incense can be felt while inside. During Buddhist holidays, the smoke and intense smell may prevent tourists from spending too much time in the interior.

The temple is open daily, from 05:00 to 17:00. The entrance is free of charge.
Image by trindade.joao on Flickr under Creative Commons License.