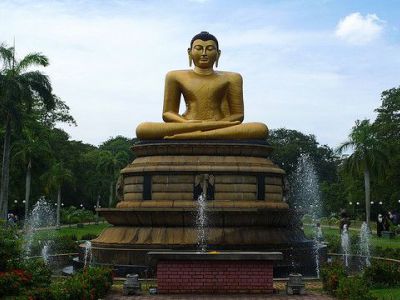 The Viharamahadevi Park (formerly Victoria Park) is a public park located in Colombo, next to the National Museum in Sri Lanka. It is the oldest and largest park of the Port of Colombo. Situated in front of the colonial-style Town Hall building, the park is named after Viharamahadevi, the mother of King Dutugamunu. The park was built during the British rule of Sri Lanka, and was originally named "Victoria Park" after Queen Victoria. The park features include a huge Buddha statue and a series of water fountains. It also includes a mini zoo, a children's play area and a BAC Jet Provost. The Viharamahadevi Park is the only large-scale public park in Colombo, and is maintained by the Colombo Municipal Council. The Vihara Maha Devi Park Open Air Stadium is a venue for concerts and public events.
Image by Sissssou2 on Flickr under Creative Commons License.
Sight description based on wikipedia