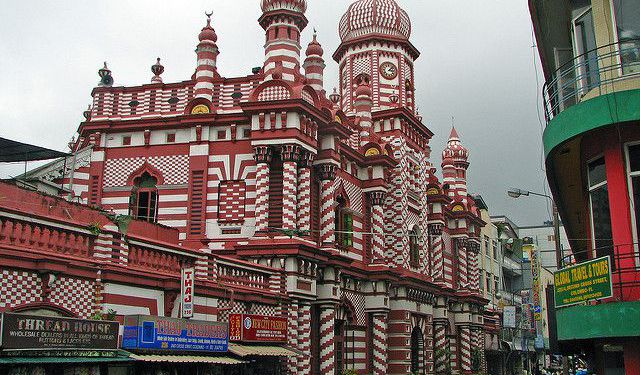 The capital and the largest city of Sri Lanka, Colombo is a busy and vibrant metropolis with a mixture of modern life, colonial architecture and ancient ruins. Galle Face Green, Old Parliament House, Khan Clock Tower and many other notable attractions make up this orientation walk.
Image Courtesy of Flickr and McKay Savage.
How it works: Download the app "GPSmyCity: Walks in 1K+ Cities" from iTunes App Store or Google Play to your mobile phone or tablet. The app turns your mobile device into a personal tour guide and its built-in GPS navigation functions guide you from one tour stop to next. The app works offline, so no data plan is needed when traveling abroad.

The Galle Face Green is currently a 5 hectare ribbon strip of land between Galle Road and Indian Ocean which is now the largest open space in Colombo. This is a popular destination for children, vendors, teenagers, lovers, kite flyers, merrymakers and all those who want to indulge in their favorite pastimes next to the sea under the open sky. On Saturday and Sunday evenings, the land is busy with day trippers, picnickers and food vendors.

Image Courtesy of Flickr and clurr.
Sight description based on Wikipedia.
2

The Old Parliament is one of the most impressive buildings in the city, located just a few meters from the Indian Ocean. Visitors will be amazed by its resemblance to the Greek Temple of Goddess Athena, both of them designed in the Ionic style. Its history began with Sir Henry McCallum, who proposed to build a single building for the Legislative Council. The idea was accepted by the Government and on January 29, 1930, the Parliament was opened. Now it hosts the Presidential Secretariat and the Finance Ministry.
Image Courtesy of Wikimedia and Soman.
3

In the period of Portuguese occupation, the site where now stands St Peter's Church, was occupied by a Dominican monastery and a charity hall. The Dutch converted the structure into a government house where councils meetings took place. In 1804, the British Governor, Frederick North, decided to turn the house into Garrison Church, which was visited and blessed, in 1816, by the Bishop of the Anglo Indian church. Even if its exterior does not look like a church, the interior is decorated with a beautiful altar, tablets on the walls and a wide aisle.
Image Courtesy of Flickr and jswieringa.
4

Image Courtesy of Wikimedia and J. Olle.
Sight description based on Wikipedia.
5

Jami-Ul-Alfar Mosque is one of the most impressive buildings of its kind, decorated in red and white brick. The mosque was built in 1909, designed by architect H.L. Saibo Lebbe, and for many years was considered a landmark of the city by sailors who were approaching the shores of Colombo. Still, Jami-Ul-Alfar Mosque is one of the most visited spots in the city.
Image Courtesy of Wikimedia and Mystìc.
6

6) The Dutch Period Museum (must see)

Image Courtesy of Flickr and indi.ca.
Sight description based on Wikipedia.
7

Grand Mosque is one of the most important edifices in the religious life of the country's Muslim community, which was eager to approve the majority of decisions made by the mosque's committee. The first mention of the Mosque dates back to 1505, when the Portuguese anchored on Colombo's shore. It is believed that the beginning of Grand Mosque's history can be linked to Arab traders, who were carrying trade objects between Europe and the Orient, between the first and sixteenth centuries.
Image Courtesy of Flickr and Doctor Yuri.
8

Wolfendhal Church, whose name comes from a place called Wolvendaal, was built in the eighteenth century, and is the oldest Protestant church in the country and a vestige of Dutch architecture, representing a symbol of unity between Dutch and Sri Lankan cultures. It was established in 1749 as a replacement for the old Roman-Catholic church, on a hill that offers amazing views of the city. The church is designed in a Doric style, with its base constructed in the form of a cross and the roof resembling a dome.
Image Courtesy of Wikimedia and Navin Sigamany.
9

The New Kathiresan Kovils is a Hindu temple, situated in the Pettah district and dedicated to the God of war and victory, Scanda or Murugan. Every year the Kathiresan Temple is the starting point for one of the most important festivals for Hindu worshippers; it takes place in July - August and is called Hindu Vel festival.
Image Courtesy of New Kathiresan Kovil.