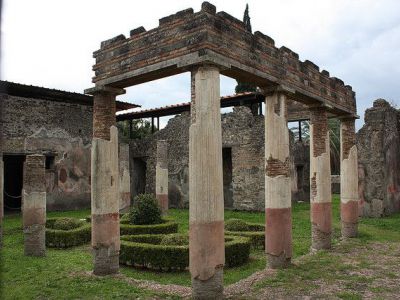 The Villa of Diomedes is located midway between the Villa of Mysteries and the city walls, on via dei Sepolcri. The rooms of this large, elegant villa were constructed around a fourteen column peristyle. The bathing area was located on the near side of the peristyle, adjacent to the road. On the opposite side stands the former triclinium, which has stunning views over the Gulf of Naples. Looking out from the dining hall, you can see the villa’s garden below.

A building in the centre of this open space once contained a swimming pool, surrounded by covered areas for dining and relaxing. This is the most notorious spot within the villa complex, for rather grisly reasons. It was here that the master of the house was trapped, along with eighteen others, by the deadly eruption of 79 AD. Their remains were found when the villa was discovered and excavated in 1771. Many of the bodies were found with large amounts of jewellery on their person. In total, thirty four bodies were found in and around the complex. Even the villa’s name is derived from a tomb – that of Marcus Arrius Diomedes, which lies across the road in the town’s necropolis.
Image by Shadowgate on Flickr under Creative Commons License.