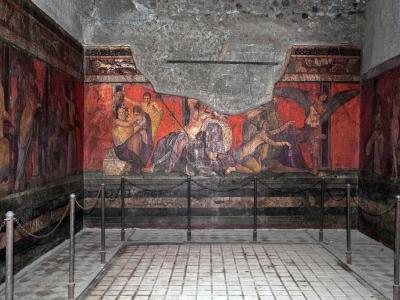 Villa of the Mysteries, Pompei (must see)

The Villa of the Mysteries is one of the most well known buildings in the historic area around Mount Vesuvius. It is not situated within Pompei itself, lying around 500 metres northwest of the main city. Believed to be a suburban villa, which were commonplace in Roman times, it can easily be reached on foot from the centre of Pompei. Admission into the city centre will usually allow access to the villa, as well as the nearby settlement of Herculaneum.

The villa is one of the best preserved buildings in the Pompei area, as it suffered little damage during either the 62 AD earthquake or the tremors prior to the eruption of Vesuvius seventeen years later. The walls of the building are lined with some of the best kept and most detailed frescoes surviving from the Roman era. The Villa of the Mysteries earned its name from the unusual paintings on the walls of the triclinium, a formal dining hall found in most Roman villas.

The frescoes in the dining hall appear to show some form of ritual, although nobody is certain of its purpose. One theory suggests the woman pictured in the frescoes is being inducted into the cult of Dionysus. An alternative idea put forward is that the paintings show an ancient marriage ritual. The dining hall also features well preserved serving areas, which may have been used to make wine and olive oil.
Image by spbutterworth on Flickr under Creative Commons License.