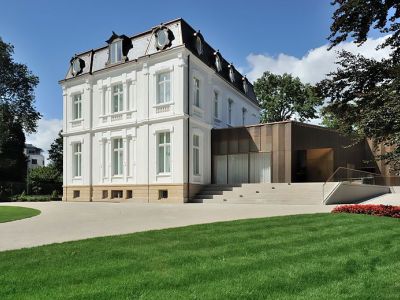 Villa Vauban is an art museum in Luxembourg City. Recently renovated and extended, it exhibits 18th- and 19th-century paintings acquired from private collections.

Built in 1873 as a private residence, the villa owes its name to a fort built on the same site by Sébastien Le Prestre de Vauban (1633–1707) as part of the city's defences. An impressive section of the old fortress wall can be seen in the museum's basement. The renovation work, completed in 2010, was planned by Philippe Schmit of the Luxembourg architectural firm Diane Heirent & Philippe Schmit. As a result of its innovative perforated copper cladding, the extension received the TECO Architecture Award in 2010. The museum is located in a park laid out by the French architect Édouard André (1840–1911), one of the leading landscape architects of his day.

The works exhibited at the Villa Vauban were originally part of three separate collections, all of which were bequeathed to the city. The first is that of Jean-Pierre Pescatore (1793–1855), who established himself as a wealthy banker in Paris. It is made up principally of 17th-century Dutch paintings, contemporary French works, as well as sculptures and drawings. The second, consisting mainly of 19th-century art, stems from Leo Lippmann (1808–1883), a banker and Consul General of Luxembourg in Amsterdam. The third collection, which once belonged to the pharmacist Jodoc Frédéric Hochhertz, comprises 18th-century history paintings, still lifes and portraits. It was later inherited by Eugénie Dutreux-Pescatore (1810–1902). The Dutch Golden Age paintings include works by Cornelis Bega, Gerrit Dou and Jan Steen while Eugène Delacroix, Jean-Louis-Ernest Meissonier and Jules Dupré are among the artists who painted the 19th-century French works.

Why You Should Visit:
Not overwhelming like so many museums can be – just an impressive collection of art with a good audio guide in English, and if nothing else you can sit and relax in the beautiful garden (no entry fee).

Tip:
Check the website before committing to a visit as their temporary exhibitions may not be for everyone.