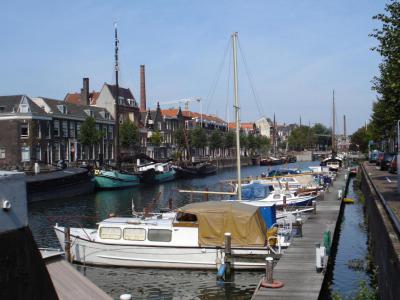 The Voorhaven (“outer harbor”) in Delfshaven, Rotterdam is exactly what its name suggests. This harbor was dug in 1389 as part of the construction of the Delfshavense Schie (waterway) between Overschie and the Nieuwe Maas, and functioned as an outer harbor for the then inland city of Delft (separate from Rotterdam).

The very term “outer harbor” means that it lies in front of the actual harbor or canal/lock, and the Voorhaven of Rotterdam-Delfshaven is one of the earliest and perfect examples of such in the Netherlands.

Originally, the Voorhaven was situated outside the dykes (i.e. between Schielands Hoge Zeedijk and the Nieuwe Maas) and the Aelbrechtskolk was the lock. After the opening of the Ruigeplaatsluis in 1875, the Voorhaven was free of tides.