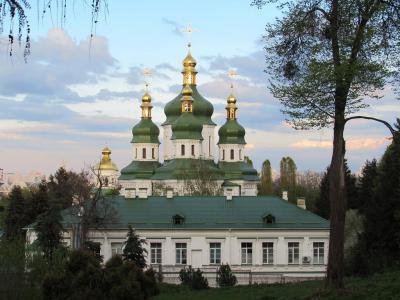 Vydubitsky Monastery is an 11th century convent located in the southern part of the Ukrainian capital, on the shore of the Dnieper river. The monastery was built by Prince Vsevolod Yaroslavich in the second half of the 11th century; during 1070-1088 St Michael's Cathedral (part of the Vydubitsky complex) was erected. By the end of the century, in 1096, the monastery was attacked by the nomadic tribes of Cumans (also known as the Polovtsy). The monastery remained in ruin until the 17th century, when the Cathedral of St. George, the Refectory, and the Bell Tower were added to the complex. Those were built in the Ukrainian Baroque style, combining local architectonic style with Baroque elements.

During the Soviet era, the monastery was closed and reopened only after Ukraine had gained independence in the early 1990s. Before that, in 1967-82, all of the Vydubitsky complex buildings, namely: the Church of Archangel Michael, the George Church, and the Church of the Saviour, were restored by architect R. Bykov. During the restoration works, some 11th century frescoes were discovered and revealed to the public. Also, the monastery’s cemetery, the final resting place of some prominent Ukrainians, was re-organized. Among those who are buried there are Bogdan and Varvara Khanenko (art collectors), K. Ushinsky (professor of Kiev University), V.A. Betz (hydraulic engineer), and other key figures of Ukrainian science and culture.
Image by Anna Kovalchuk on Wikimedia under Creative Commons License.