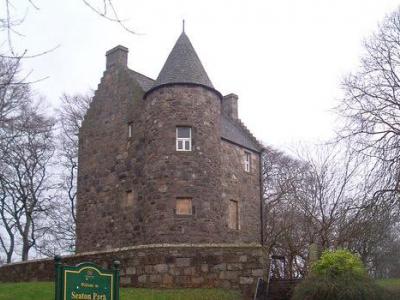 Wallace Tower, sometimes referred to as Benholm's Lodgings, is an early 17th-century building located at the southern edge of Seaton Park. It was originally constructed in the center of Aberdeen. It was moved one stone at a time and rebuilt in Seaton Park in the 1960s.

The tower was built by Sir Robert Keith of Benholm. It was later bought by the Duns of Tarty, and then Abernethy. It eventually became a pub until, in a controversial move, retailer Marks & Spencer sought to relocate the tower so that their retail store could be expanded.

The move was a difficult one for Marks & Spencer. The interior of the building had rotted wood that could not be moved and was therefore burned. Likewise, the city worried that anyone who leased the building would attempt to purchase it under right-to-buy laws. Therefore, though the tower was moved, it has remained unused and boarded up.

Those who wish to see the Wallace Tower can do so by going to Seaton Park. The park is open 24 hours.
Image by Stanley Howe on Wikimedia under Creative Commons License.