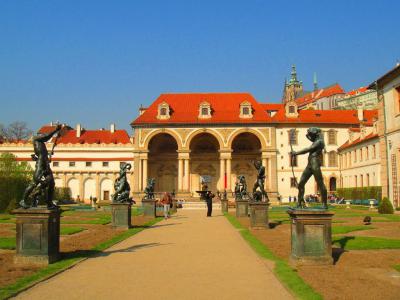 The first Baroque building in Prague, the Wallenstein Palace was commissioned by the 1st Count Wallenstein in the 17th century. The count was a vain man and wanted his palace to rival the Prague Castle, for which purpose he had razed over 20 houses to clear space for his nascent complex and adjacent gardens. The latter were built alongside the palace, from 1623 to 1629, designed strictly geometrical, in early Baroque style, replete with formal flower beds, bronze statues of Greek gods and heroes from the Greek mythology.

The immediate eye-catcher here is the massive sala pavilion, unprecedented for the time of its construction, and an artificial limestone grotto with stalactites, known as the 'Grotesquery' or Dripstone wall. There is also an aviary full of owls and peacocks, some of which also walk the garden pathways, plus the well-designed ornamental ponds with carp and water plants. In summer, the garden is open to concerts and theatrical performances.

The interior of the palace is richly decorated with stuccowork depicting battle trophies, weapons and musical instruments. In the Audience Hall, a wonderful fresco depicts Vulcan at work over his forge; the walls of the Astrological Corridor are covered in astrological motifs. The most prominent room within the palace is the enormous Knight’s Hall, two storeys high, adorned with the ceiling fresco showing the count as Mars, the Roman God of War in his chariot.

Presently, the palace is the seat of the Czech Republic Senate.

Tip:
You may visit the Palace only on weekends; the Gardens are open every day of the week.
The entrance is free to both. It's quite easy to pass by and miss the vast garden space, enclosed by high walls, unless you go to one of the smaller entrances, very discreetly marked.