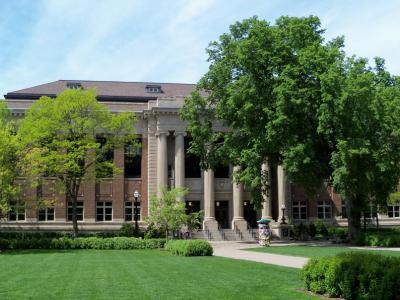 Walter Library is an academic library located on the East Bank campus of the University of Minnesota. It currently houses the College of Science and Engineering Library and Dean's Office, the Digital Technology and Digital Media Centers, the Learning Resources Center, and the Minnesota Supercomputing Institute. Walter Library is situated along Northrop Mall.

Walter Library was built between 1923 and 1924 for a total cost of $1.4 million. Designed by Minnesota State Architect Clarence H. Johnston, the building served as the university's primary library for much of the twentieth century. The library was named in honor of Frank Keller Walter in 1959. Walter, who had participated in the planning of the library, was the University of Minnesota Librarian from 1921 to 1943.

Walter Library was formally listed in the National Register of Historic Places as a contributing property to the Northrop Mall Historic District in January 2018.

Walter Library was designed in the Beaux-Arts style of architecture by Minnesota State Architect Clarence H. Johnston, Sr. Like the other buildings on Northrop Mall, Walter Library features a red brick facade with Bedford limestone trim and a colonnaded Ionic Order portico. Its interiors feature ornate columns and pilasters, marble staircases, vaulted ceilings, and gold leaf gilding. A common motif found within the library is that of an owl, which represents both wisdom and knowledge.
Image Courtesy of Wikimedia and AlexiusHoratius.
Sight description based on Wikipedia.