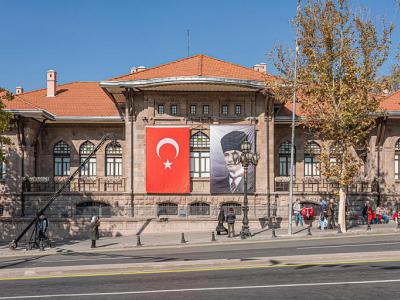 The one-storey andesite building was designed by architect Salim Bey, at the request of Enver Pasha, as the headquarters of the Committee of Union and Progress. Its construction commenced in 1915. Thousands gathered in Ulus Square for the opening of the assembly on April 23, 1920 and Sinop representative Serif Bey, who as the oldest member had been chosen as President of the Assembly, made the first speech. The building remains open to the public, having recently undergone further renovation, as the Independence War Museum with a number of rooms currently open to view.
Image by Mutt on Wikimedia under Creative Commons License.
Sight description based on wikipedia

As a cultural center Ankara is one of the most attractive cities in Asia, preserving history and traditions from the ancient times. Some of the facts, about the city's historical heritage, can be discovered at the city's museums. Take the following tour below to discover Ankara's history and development as a city.