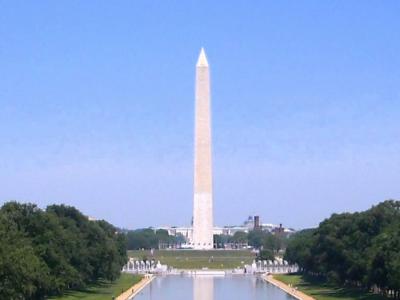 The Washington Monument was built to honor George Washington. It stands in the center of the US Capital to symbolize the importance of President Washington to the country. The idea to raise the monument was first discussed in 1783. It wasn’t until 1847 that a design was agreed upon. However, that design was very different from the monument that stands today.

The obelisk was to rise above a temple that would house artifacts of American presidents and heroes. Over the years that plan was dropped, and today the obelisk is rather plain. The first cornerstone was laid in a Masonic ceremony on July 4, 1848. The same Masonic trowel that President Washington used to lay the cornerstone for the Capitol was used.

Work on the Washington Monument was slow and eventually stopped altogether during the Civil War. Modifications were made to the design and the work resumed in 1880, with the capstone placed December 6, 1884. The hollow shaft of the monument contains an elevator to the top, plus a staircase with 897 steps. There are 188 interesting, carved blocks of stone to be viewed along the staircase, quarried of native stones brought from all the 50 states. These stones were originally supposed to arrive with a donation attached to raise funds. Eventually, the stones arrived but the donation did not.

Tip:
Ride the elevator to the top to get the best views of DC by far. Entry is free, but a ticket is a must for everyone going into the monument.
One person from your party can obtain up to 6 tickets and pick a time to go up in the monument. Tickets can also be ordered ahead of time for a fee.
It is at its best in the early evening, when the sky is darkening and the lights at the base illuminate the column. You can take some lovely photos at that time of day.
Image Courtesy of Wikimedia and Josh Carolina.
Sight description based on Wikipedia.