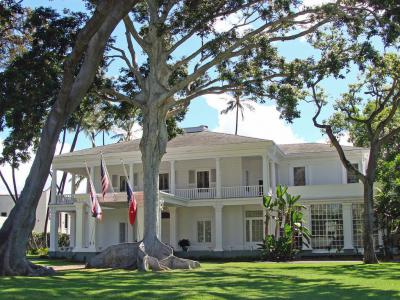 Washington Place is located in the Hawaii Capital District in Honolulu, and was designated as a National Historic Landmark in 2007. It was originally built in the 1840's by the father-in-law of Hawaii's last reigning monarch, Queen Liliuokalani, and was the site of her arrest during the overthrow of the Kingdom of Hawaii.

John Dominis was a wealthy trader who commissioned Washington Place for himself and his family. Tragically, he was lost at sea in 1846, before the house was finished. His wife, Mary, lacking a way to support her family after her husband's death, converted Washington Place to a boarding house in order to support herself and her son. Her son, John Own Dominis, later married Queen Liliuokalani when she was still a young princess. The house became their home, and was eventually left solely to Queen Liliuokalani after her husband's death. She died in the house in 1917, after being deposed.

After Queen Liliuokalani's death, Washington Place served as a governor's mansion from 1921 to 2001. All total, thirteen governors of Hawaii have lived there, until a new governor's residence was built on the same grounds in 2001, and Washington Place was converted into a Hawaiian history museum.
Image by CaesarGJ on Wikimedia under Creative Commons License.