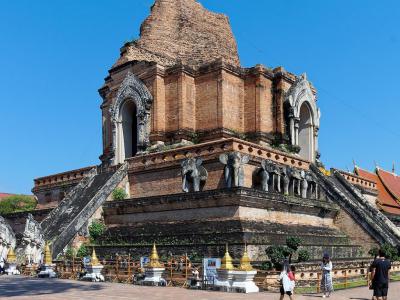 The Wat Chedi Luang is a large ruined temple located in the heart of the old city area of Chiang Mai. It gets its name from the large Chedi or Stupa that once formed part of the temple complex.

The construction of Wat Chedi Luang was begun by King Saen Muang Ma to hold the ashes of his father, Ku Na. His successors further expanded the temple and construction was completed in 1475. At the time, it housed the Emerald Buddha regarded as the holiest religious object in Thailand. In 1575, the temple fell to ruin and was never rebuilt. In the 1990s, the UNESCO and the Japanese Government built a new Chedi in Central Thai style rather than in the traditional Lanna style of other temples in Chiang Mai.

Visitors can still see the old brick wat. The large stairway that leads to the temple is guarded by stone figures of mythical snakes and elephants. The large Viharn or assembly hall has a brass statue of a standing Buddha installed by King Saen Muang Ma. He also planted the ancient Dipterocarp tree in the grounds. It is believed that a great catastrophe will befall the city when the tree falls. A small cross-shaped building adjacent to the tree houses the city pillar dedicated to the spirit of the city. The tree and the spirit are said to protect Chiang Mai from evil and disaster.

Why You Should Visit:
If you want to see the monks chanting, this is the best place to go. Twice a day, 8am and 5:30pm, monks gather in the main hall to chant.

Tip:
If possible, go at (or stay until) nightfall to walk around this one. You can feel the peacefulness and the ambiance going after dark because these parts of the city are full of magic!