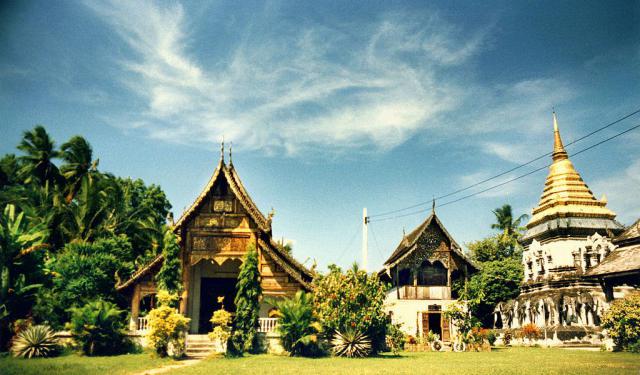 Amid the multitude of impressive sights in Chiang Mai, religious temples really stand out. The city isn't just about one or two of them but has over 300 ‘wats’, which is more than elsewhere in Thailand. Some of these temples are as old as the city itself and were built by the kings not only to demonstrate their faith, but also to show off their wealth and power.

In the past, apart from being places of worship, they also served as schools and hospitals. Today, the holy structures of Chiang Mai are very much as active as ever, representing invaluable bridges between the past and present, enabling people to maintain links with the timeless traditions of their ancestors.

The majority of Chiang Mai's temples are of the ‘Lanna’ style, characterized by curved wooden roofs pointing up at the top. Among them, Wat Chedi Luang complex in the middle of the Old City is a definite must-see. Loosely translating from the old Lanna language to “very big”, the enormous Luang temple certainly lives up to its name. Its main chedi stands 80 meters tall, which is the highest point in the Old City.

A walking distance from Luang is another not-to-be-missed – Wat Phra Singh. Thanks to a thorough renovation in the 19th century, followed by numerous licks of paint ever since, it has been one of the most visually impressive temples in Chiang Mai. Its main building steals the show with the iconic slanted Lanna-style roofs and intricately decorated façade that shines brightly in the sunlight.

To explore these and other temples of historic and cultural importance in Chiang Mai, take this self-guided walking tour.
Image Courtesy of Wikimedia and Fotograf.
How it works: Download the app "GPSmyCity: Walks in 1K+ Cities" from iTunes App Store or Google Play to your mobile phone or tablet. The app turns your mobile device into a personal tour guide and its built-in GPS navigation functions guide you from one tour stop to next. The app works offline, so no data plan is needed when traveling abroad.

Chaing Mai’s most important and sacred image of the Buddha, the Phra Buddha Singh is housed in the assembly hall of this ancient temple. Every year, during the Songkran festival, the statue is taken from the assembly hall and carried through the streets of Chiang Mai in a religious procession during which the spectators honour the statue by sprinkling water over it.

Wat Phra Singh was constructed by King Pha Yu to contain the ashes of his father, Kham Fu. In 1367, the Phra Singh image of the Buddha found its way to Chiang Mai from the Mahabodhi temple in Bodh Gaya in India. The temple gets its name from this statue of the Buddha with a unique lion style. The temple is guarded by stone lions.

The Wat Phra Singh complex consists of a large assembly hall or Viharn with a gilded copper image of the Buddha surrounded by white pillars supporting a red roof. The smaller assembly hall houses the Phra Singh statue. The hall is covered with paintings of the Buddhist folk tales – the Jataka tales. The Ubosot or ordination hall is perpendicular to the small Viharn and is decorated with elaborate mandala designs. The complex also contains a small monastic library and several Chedis including an old one dating back to 1345. The statue of Phra Singh is taken from the temple in procession around Chiang Mai during the Songkran or Thai New Year festival annually.

Why You Should Visit:
This is indeed one of the largest temples in the city, and also one of the prettiest, with a peaceful atmosphere.
There is also the possibility of talking to monks and having one or more days of Buddhism and meditation classes.

Tip:
The monks here are serious and prefer not to have pictures of the Buddha statues, believing this to be disrespectful. They also discourage the use of the Buddha as art, asking that representations be confined to shrines, whether public or private.

The Wat Chedi Luang is a large ruined temple located in the heart of the old city area of Chiang Mai. It gets its name from the large Chedi or Stupa that once formed part of the temple complex.

The construction of Wat Chedi Luang was begun by King Saen Muang Ma to hold the ashes of his father, Ku Na. His successors further expanded the temple and construction was completed in 1475. At the time, it housed the Emerald Buddha regarded as the holiest religious object in Thailand. In 1575, the temple fell to ruin and was never rebuilt. In the 1990s, the UNESCO and the Japanese Government built a new Chedi in Central Thai style rather than in the traditional Lanna style of other temples in Chiang Mai.

Visitors can still see the old brick wat. The large stairway that leads to the temple is guarded by stone figures of mythical snakes and elephants. The large Viharn or assembly hall has a brass statue of a standing Buddha installed by King Saen Muang Ma. He also planted the ancient Dipterocarp tree in the grounds. It is believed that a great catastrophe will befall the city when the tree falls. A small cross-shaped building adjacent to the tree houses the city pillar dedicated to the spirit of the city. The tree and the spirit are said to protect Chiang Mai from evil and disaster.

Why You Should Visit:
If you want to see the monks chanting, this is the best place to go. Twice a day, 8am and 5:30pm, monks gather in the main hall to chant.

Tip:
If possible, go at (or stay until) nightfall to walk around this one. You can feel the peacefulness and the ambiance going after dark because these parts of the city are full of magic!

There are many temples in Chiang Mai. It's impossible to visit the city and not see the Buddhist temples as you wander through the streets of Old Town. Wat Sum Pow, also called Wat Sam Phao, is one of the Buddhist temples built during the reign of the Mang Rai dynasty. This temple is an excellent example of architecture and decorations used by the first inhabitants of the area, called the Lanna.
Image Courtesy of Михаил Евлампьев.
4

Off the beaten path for most tourists, this quaint temple is great to get out of the midday sun, but also feels amazingly peaceful considering its proximity to the bustling streets of Chiang Mai. Boasting two wonderful, ancient chedis (stupas) hidden away behind the grounds near the back, as well as artistic adornments from the fences to the temple proper, the complex also features a small garden for those who want to genuinely take part in meditation. What is more, 1) the head monk speaks good English and is only too happy to talk about the history of the temple and the monks who reside here; 2) toilets are available for all.
Image Courtesy of Wikimedia and Јован Вуковић.
5

Wat Sadeu Muang is also called Wat Inthakin and the Temple of the City Navel. The city pillar was first brought to this temple and remained here for an extended period of time. It is also said that this was the site where one of the kings of the Lanna decided to establish the city of Chiang Mai. According to tradition, the remains of this king were brought here as well. The city pillar was later moved to another location and the temple lost some of its importance.
Image Courtesy of Wikimedia and Stefan Fussan.
6

Chiang Mai's oldest temple, Wat Chiang Man was built in 1296 by the Lanna King Mengrai who laid the foundations of the city. It is said that King Mengrai lived at the temple while his palace was being built. A stele dated 1581 near the Ubosot records that the foundation of the city of Chaing Mai was on April 12th, 1296 at 4 pm.

The small Viharn or assembly hall in the Wat Chiang Man complex contains the crystal Buddha which once belonged to Chama Devi the queen of Haripunchai. King Mengrai burned the kingdom of Haripunchai and founded Chiang Mai. The Crystal Buddha dates back to the year 663 AD. The other statue in the Viharn is the Marble Buddha. Locals pray to the idol for rain and on April 1st a rain festival is held annually. The large Viharn has the oldest Buddhist statue in Chiang Mai. Installed in the year 1465, it depicts the Buddha holding a begging bowl. There is a 15th-century Stupa with carved elephants on its stone walls showing the influence of monks from Sri Lanka. The temple complex also has a repository of religious scriptures and a lotus pond.

Why You Should Visit:
If you enjoy architecture, this will blow you away. The main temple is over the top with decorations and ornateness. Deep reds and gold accentuate everything.
The details on the outside of the buildings are breathtaking when the sun hits them. The complex is immaculately kept all of the time.

Tip:
The Tha Phae Gate along the river is on the way to Wat Chiang Man if walking from the Night Bazaar direction and is worth a quick 10 min stop off also – nice opportunity for a photo!

One of the reasons tourists visit Chiang Mai is shopping. Indeed, this city is fit to captivate anyone with its shopping opportunities, especially when it comes to diverse and unique goods such as silk, silver, clothing, ceramics, antiques, Buddhist art, lacquer and neilloware, of consistently good value and quality and at affordable prices. Chiang Mai is one of the cheapest places to shop in...  view more

Situated in the mountainous northern part of Thailand, Chiang Mai ("New City" in Thai) was founded in 1296 as the new capital of the then independent Kingdom of Lan Na, succeeding its former capital, Chiang Rai. The strategic location on the Ping River (a major tributary of the Chao Phraya River) and its proximity to major trading routes contributed to the city's historic...  view more