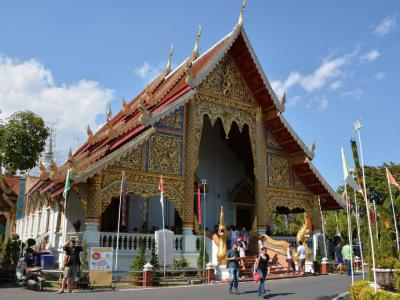 Chaing Mai’s most important and sacred image of the Buddha, the Phra Buddha Singh is housed in the assembly hall of this ancient temple. Every year, during the Songkran festival, the statue is taken from the assembly hall and carried through the streets of Chiang Mai in a religious procession during which the spectators honour the statue by sprinkling water over it.

Wat Phra Singh was constructed by King Pha Yu to contain the ashes of his father, Kham Fu. In 1367, the Phra Singh image of the Buddha found its way to Chiang Mai from the Mahabodhi temple in Bodh Gaya in India. The temple gets its name from this statue of the Buddha with a unique lion style. The temple is guarded by stone lions.

The Wat Phra Singh complex consists of a large assembly hall or Viharn with a gilded copper image of the Buddha surrounded by white pillars supporting a red roof. The smaller assembly hall houses the Phra Singh statue. The hall is covered with paintings of the Buddhist folk tales – the Jataka tales. The Ubosot or ordination hall is perpendicular to the small Viharn and is decorated with elaborate mandala designs. The complex also contains a small monastic library and several Chedis including an old one dating back to 1345. The statue of Phra Singh is taken from the temple in procession around Chiang Mai during the Songkran or Thai New Year festival annually.

Why You Should Visit:
This is indeed one of the largest temples in the city, and also one of the prettiest, with a peaceful atmosphere.
There is also the possibility of talking to monks and having one or more days of Buddhism and meditation classes.

Tip:
The monks here are serious and prefer not to have pictures of the Buddha statues, believing this to be disrespectful. They also discourage the use of the Buddha as art, asking that representations be confined to shrines, whether public or private.