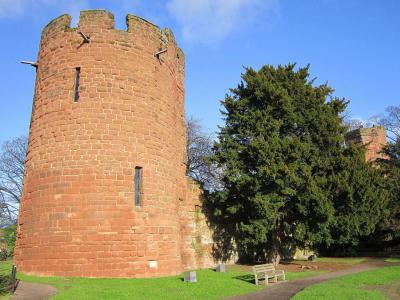 The Water Tower is a 14th-century tower in Chester which is attached by a spur wall to Bonewaldesthorne's Tower on the city walls. The original name of the tower was New Tower but in the 17th century it became known as the Water Tower, although the City Assembly tried to insist on the usage of its correct name. The tower was built between 1322 and 1325, at which time it stood in the River Dee. The architect was John (de) Helpston. Its prime purpose was to defend the port of Chester, and it was also used to monitor the movements of shipping and to ensure that the custom dues were paid.

The tower and spur wall are built in sandstone rubble. The tower is about 75 feet (23 m) high, and the wall is 97 feet (30 m) long, just over 11 feet (3 m) wide and about 24 feet (7 m) high. An archway in the city walls leads to 44 stone steps on the way down to the tower. The wall is crenellated. The tower is circular at its base with a square turret above, in two stages containing octagonal chambers, one above the other.