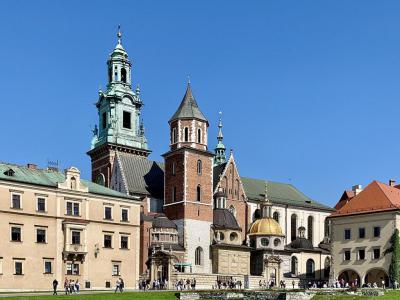 Wawel Cathedral is a Roman Catholic church and cathedral of the Archdiocese of Kraków. More than 900 years old, it is the Polish national sanctuary and traditionally has served as coronation site of the Polish monarchs. The church is also the main burial site for Polish monarchs since the 14th century. The crypts beneath the Wawel Cathedral hold the tombs of many national heroes, generals and revolutionaries.

The current Gothic structure is the third edifice on this site: the first was constructed and destroyed in the 11th century. The second one, constructed in the 12th century, was destroyed by a fire in 1305. The construction of the current one began in the 14th century on the orders of bishop Nanker.

There is a museum inside that was opened in 1978 by Pope John Paul II and is known for its superb religious art collection. There are many precious sculptures, paintings, golden monstrances, old crosses, and fancy reliquaries. Here you will see one of the most precious of things in Poland, King Sigismund II August’s ornate sword from the 16th century.

Given its history and national significance, Wawel Cathedral is well worth a visit on your trip to Krakow.
Image by Kgbo on Wikimedia under Creative Commons License.