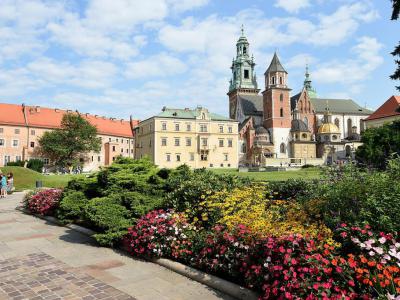 The Wawel Royal Castle is a castle residency located in central Krakow, and one of the first UNESCO World Heritage Sites in the world. Built at the behest of King Casimir III the Great, it consists of a number of structures from different periods situated around the Italian-styled main courtyard. The castle, being one of the largest in Poland, represents nearly all European architectural styles of medieval, renaissance and baroque periods. The Wawel Royal Castle and the Wawel Hill constitute the most historically and culturally significant site in the country.

The castle is part of a fortified architectural complex erected atop a limestone outcrop on the left bank of the Vistula River, at an altitude of 228 meters above sea level. The complex consists of numerous buildings of great historical and national importance, including the Wawel Cathedral where Polish monarchs were crowned and buried. Some of Wawel's oldest stone buildings can be traced back to 970 AD, in addition to the earliest examples of Romanesque and Gothic architecture in Poland. The current castle was built in the 14th-century, and expanded over the next hundreds of years.

For centuries the residence of the kings of Poland and the symbol of Polish statehood, Wawel Castle is now one of the country's premier art museums. Established in 1930, the museum encompasses ten curatorial departments responsible for collections of paintings, including an important collection of Italian Renaissance paintings, prints, sculpture, textiles, among them the Sigismund II Augustus tapestry collection, goldsmith's work, arms and armor, ceramics, Meissen porcelain, and period furniture. The museum's holdings in oriental art include the largest collection of Ottoman tents in Europe.

Why You Should Visit:
The Wawel Royal Castle was among the first UNESCO World Heritage Sites declared in 1978.

Tip:
You can walk around the grounds for no charge at all; what you choose to do dictates the entry price. Opting for the State Rooms and Royal Apartments is worth it as you see a lot of impressive and well-preserved interiors. The Sandomierska Tower will give you a great all-round view of the place and the Dragon's Den takes you to the underground caves, but note that these are seasonal (closed Nov-Mar).