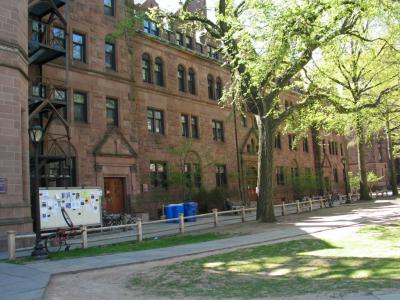 Welch Hall is a freshman dormitory at Yale University. The building is located on Yale University's Old Campus. Pierce N. Welch, an 1862 graduate of Yale College, Mrs. Cora Van Milligan, and Mrs. Grace M. Davies, heirs of Harmanus M. Welch, mayor of New Haven from 1860 to 1863, donated the building to Yale in 1891 in accordance with their father's wishes.

The architect Bruce Price designed the building. Welch Hall faces College Street and the New Haven Green on one side and the interior of Yale's Old Campus on the other. Carved above the first-floor windows at both ends of the College Street façade is the inscription AD 1891. The dormitory is Victorian English Collegiate in style and built of Longmeadow freestone. The building has been altered and renovated several times.

Welch Hall is currently occupied by Davenport College freshmen. It is considered among Yale students to be one of the more desirable freshman residence halls because it has many single bedrooms, large common rooms, and internal emergency exit doors without alarms, allowing residents to move freely between different parts of the building without having to go outside or through the basement.
Image Courtesy of Wikimedia and GK tramrunner229.
Sight description based on Wikipedia.