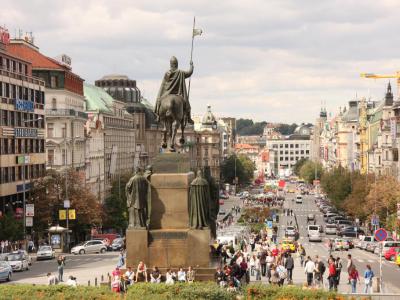 Wenceslas Square is almost an avenue, shaped as a very long rectangle, running from the northwest boundary of the New Town to the Neoclassical National Museum at the southeast end.

The square came into being in the 14th century, when Charles IV founded the New Town, and initially served as a horse market. During the national revival in the 19th century, the place received its current name along with a very fine statue of St. Wenceslas – The Good King mounted on his horse surrounded at the base with four statues: Saint Agnes of Bohemia, Saint Prokop, Saint Adalbert of Prague, and Saint Ludmila.

Perhaps because of its original status as a market, it has always been a natural gathering place – the Nazis' demonstrations, the national sporting event celebrations, and the focal point of the Velvet Revolution in 1989 all took place here. When the Communist rule came to an end, the announcement to the Czech nation was also made at the square.

Today, Wenceslas square is as busy a spot as ever, frequented by locals and tourists alike coming to visit the National Museum or the Prague State Opera, or the numerous offices, hotels, international shops, clubs, restaurants and snack bars lining the avenue-square on both sides.

Why You Should Visit:
A symbol of Czech nationhood and the best-known statue in Prague.

Tip:
Dominated by St. Wenceslas' statue, the square is best captured on photo with the statue being at your back.
Image Courtesy of Flickr and Ronnie Macdonald.
Sight description based on Wikipedia.