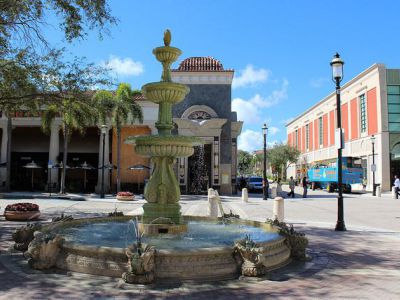 The West Palm Beach City Center is a 270,000 square foot five-story facility that houses City Hall, the West Palm Beach Library, and the Palm Beach Photographic Center. It is located on Clematis Street and is bordered by the North Banyan Boulevard. The cultural, civic, and artistic center opened in 2009. The hub is designed to be a one-stop facility for West Palm Beach residents.

The origins of the center began in 1995 when city officials realized that the previous City Hall was inadequate. In 1997, consultants determined that the existing City Hall was too small and did not meet hurricane code requirements. The City Hall building also had major issues with heating, air conditioning, ventilation, and the elevators.

The benefit of the West Palm Beach City Center is that it saves money by consolidating city employees and functions. There is also the added advantage of the revenue that the library and photographic center generate. Also, the library moving into the center has given the street waterfront access. The city also plans to create a City Commons and waterfront park in the location of the former library. In addition, the Palm Beach Photographic Center is host to the annual FotoFusion Festival.
Image by Phillip Pessar on Flickr under Creative Commons License.

This sight is featured in a self-guided walking tour of West Palm Beach, Florida within the mobile app "GPSmyCity: Walks in 1K+ Cities" which can be downloaded from iTunes App Store or Google Play. Please download the app to your mobile phone or tablet for travel directions for visiting this sight. The app turns your mobile device to a personal tour guide and it works offline, so no data plan is needed when traveling abroad.

Most churches in West Palm Beach were constructed in the 19th century and are magnificent embodiments of the variety of architectural styles of that epoch. Take this tour to discover those places of worship that are valued not only for their contribution to the community but also for their intrinsic architectural value.

The Nightclubs of West Palm Beach

West Palm Beach offers a wide variety of bars, nightclubs and lounges, each with an unique flavor so that no one leaves disappointed. Here, you will find everything you could possibly look for: classy clubs, good music and a fantastic crowd. Follow this guide to get the party started.