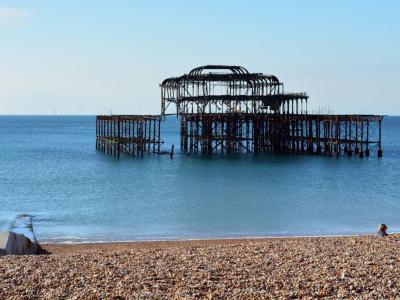 The West Pier is a pier in Brighton. It was built in 1866 by Eugenius Birch and has been closed and deteriorating since 1975, awaiting renovation, although after two fires and several storms, little is left in situ. It was Brighton's second pier, joining The Royal Suspension Chain Pier of 1823, and it is one of only two Grade I listed piers in the UK, the other being Clevedon Pier.

A concert hall was added in 1916 and a new top-deck entrance in 1932. In 1965 the pier was bought by a company that owned some seafront hotels and entertainment venues. They had ambitions for the pier but as maintenance costs increased the pier was closed in 1975 when Brighton Corporation declined to buy it and the pier passed into the hands of the Crown Estates Commissioners. A trust was formed to save the pier and in 1984 they bought it for a nominal sum. On 23 June 2004 high winds caused the middle of the pier to collapse completely. Despite all these setbacks, the West Pier Trust remained adamant that they would soon begin full restoration work.

Kemp Town is the eastern district of Brighton, which is home to grand seafront crescents, churches, elegant squares, numerous shopping venues, galleries and cozy pubs. The area is also known as the largest spiritual home of the city's gay and lesbian community. Next self-guided tour will lead to the most interesting and prominent places in this lively area.