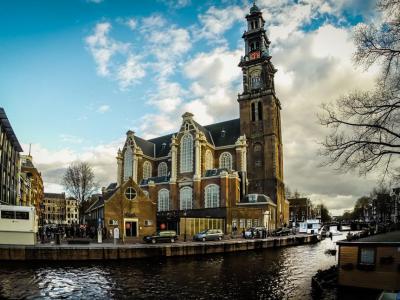 Located near the Jordaan district, in Prinsengracht canal, is Amsterdam's largest church in the Netherlands that was built for Protestants – the Westerkerk. Designed in Dutch Renaissance style along with a hint of Gothic, it stands out impressively with a tower replicating the crown of Habsburg emperor Maximilian I in blue, red and golden colors.

Besides its architecture, Westerkerk church is renowned for its organ concerts and its carillon - the latter either operated by a carillonneur (on Tuesdays between noon and 1pm) or automated, with different songs tinkling out on the quarter-hour, day and night (it drives some locals nuts). Anne Frank described the tunes in her diary. Rembrandt, who lived nearby during his poverty-stricken last years, and his son, Titus, are buried (somewhere) here.

Tip:
If you don't mind a cardio workout, the tower climb (open from April to October) is spectacular, both for the close-up view of the bells and also for the amazing view from the platform near the top over much of Amsterdam. The stairs at the top are fairly steep, but not too arduous.