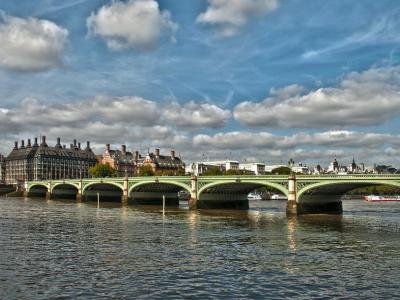 Westminster Bridge is one of the many bridges spanning the river Thames in Central London. The current structure, created by Thomas Page, dates back to 1862 and replaces the original one built in 1750 by Swiss architect Charles Labelye. Because of its proximity to Houses of Parliament, and particularly the House of Commons, the bridge is painted the same green color as the benches inside the Commons. Oftentimes, because of this proximity to the seat of power, people mistake it for London Bridge, which is further downstream.

A popular legend has it that the infamous Jack the Ripper threw himself off Westminster Bridge on the last stroke of midnight on 31st December 1891 to escape captivity and disclosure of his identity. Something we'll never know for sure...

What does make this bridge special though is the views. The Palace of Westminster, the London Eye, County Hall, and the Thames itself make for a fabulous backdrop. The views north, east, and south are all superb.

Why You Should Visit:
An iconic bridge with great views to London Eye, Westminister, Big Ben, and the Thames river.
Image Courtesy of Flickr and Berit Watkin.