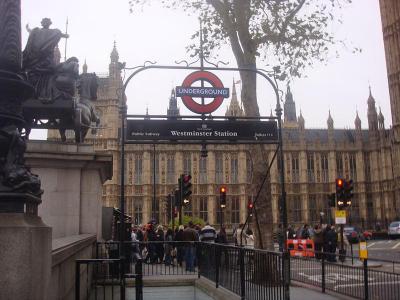 For muggles the Westminster Underground station may be the nearest to the Houses of Parliament, Westminster Abbey, and Westminster Bridge, but for the wizards like Mr. Weasley and Harry Potter it was also passage to the Ministry of Magic, as shown in “Harry Potter and the Order of the Phoenix.” Poor Mr. Weasley struggled here for a bit with the barriers on his way out, not knowing how to properly apply the ticket – just like many of the first-time comers to the London Underground!

To film this scene in the movie, the station had to be shut down for a whole day. In another instance, Westminster Station came into sight when Harry and the Order of the Phoenix members whizzed past it, along the River Thames, towards the London Eye, aboard their broomsticks - yee-haw!!!
Image by Lemur12 on Wikimedia under Creative Commons License.