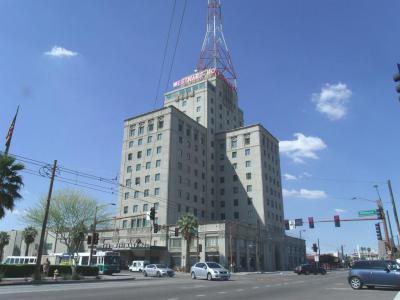 Westward Ho is a very famous skyscraper and visitor attraction located in downtown Phoenix. You can find it at 618 North Central Avenue. It was completed in 1928, and was originally put into use as a hotel, which went by the same name. At one point in history (pre 1960) this hotel was the tallest building in the state of Arizona. It was quite impressive for its day.

The building was solely used as one of the premiere hotels in Phoenix until 1979. Two years later, the location was turned into apartment style housing for local seniors. In the 2003-2004 time frames, $8,000,000 dollars was invested in the building, which represented a significant remodel.

There is a popular urban legend that stated that this place was the original hotel used in the old movie Psycho. Actually, the Westward Ho was only used in the remake of the movie. Other than that, the most striking thing about this place is the giant radio tower that sits atop the building. It was used by KPHO-TV until 1960.
Image by Lockley on Wikimedia under Creative Commons License.