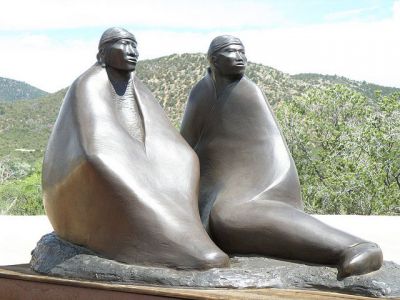 Wheelwright Museum of the American Indian, Santa Fe (must see)

The Wheelwright Museum of the American Indian is a museum devoted to Native American arts. It is located in Santa Fe and was founded in 1937 by Mary Cabot Wheelwright, who came from Boston, and Hastiin Klah, a Navajo singer and medicine man.Wheelwright and Klah were introduced in 1921 and quickly became close friends.It was not long before they determined to create a permanent record of Klah’s and other singers’ ritual knowledge. Klah dictated and Wheelwright recorded the Navajo Creation Story and other great narratives that form the basis of Navajo religion. Klah participated in yet another way: he was a weaver, and his huge tapestries were also permanent records of sandpaintings.By the early 1930s, it was clear to Wheelwright and Klah that a museum would be necessary to realize their goals.It had to offer the public an opportunity to sense the beauty, dignity, and profound logic of Navajo religion. Their chosen architect, William Penhallow Henderson, based his design on the hooghan (the hogan), the traditional Navajo home and the setting for Navajo ceremonies.

The museum’s earliest names were the Navajo House of Prayer and the House of Navajo Religion, but, soon after it opened to the public, its name officially became the Museum of Navajo Ceremonial Art. In 1977 the Museum repatriated several Navajo medicine bundles and other items to the Navajo people. With the repatriation of 1977, the museum changed its name to the Wheelwright Museum of the American Indian. It maintains growing, world-renowned collections that document Navajo art and culture from 1850 to the present, displaying changing exhibitions on traditional and contemporary Navajo and other Native American arts.