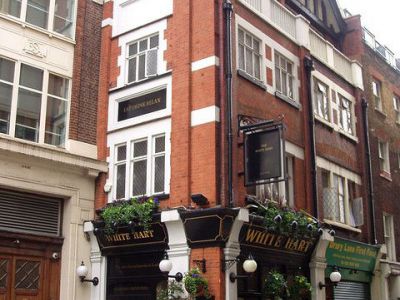 The White Hart is one of a number of pubs claiming the status of London’s oldest licensed establishments. Back in the 18th century, the area surrounding the pub was a notorious slum in London, known for its brawls, drunkenness, and prostitutes. Legend has it that regular customers of The White Hart included notorious thieves, Jack Sheppard and Richard (Dick) Turpin. Turpin even came in for a drink prior to his hanging in 1739.

Today the White Hart is a charming public house with a friendly and inviting atmosphere. Guests to the White Hart are treated to a laid-back, sociable vibe with an assortment of pub games and a good mix of music. Its menu consists of a wide selection of traditional and modern pub fare, from fish and chips, to burgers, nachos, cheese platters, and much more. The White Hart is equipped with a full-stocked bar offering plenty of beers on draught and in bottles, a selection of ciders, as well as a long list of fine spirits and liqueurs. Music generally includes popular hits from the 60s through the present, as well as some house and dance tunes.