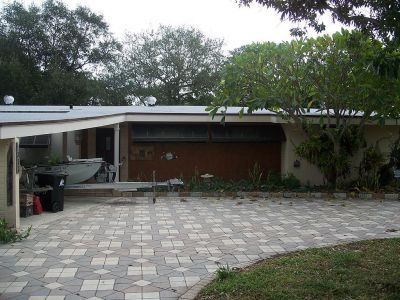 The Dr. Willard Van Orsdel King House is a historic U.S. home located at 1336 Seabreeze Boulevard. On February 21, 2006, it was added to the U.S. National Register of Historic Places.

Dr. King was a world renowned Entomologist, specializing in mosquito control. Dr. King received his Doctorate from Tulane University in 1915. He is credited with being the first person to use aerial spaying to control mosquito populations and reduce the spread of mosquito-transmitted diseases. He was head of mosquito operations at the Orlando Lab when he joined the US Army Medical Corps in 1942, and was discharged in 1945 with the rank of Colonel. He was awarded the Legion of Merit for meritorious service. He married Leila Menere Kepert in 1944 in Sydney, Australia, and they moved back to Orlando until 1953, when Dr. King retired from the Orlando Lab and moved to 1336 Seabreeze Blvd, where he continued as a consultant for all mosquito issues, until his death in March 1970.

This sight is featured in a self-guided walking tour of Fort Lauderdale, Florida within the mobile app "GPSmyCity: Walks in 1K+ Cities" which can be downloaded from iTunes App Store or Google Play. Please download the app to your mobile phone or tablet for travel directions for visiting this sight. The app turns your mobile device to a personal tour guide and it works offline, so no data plan is needed when traveling abroad.