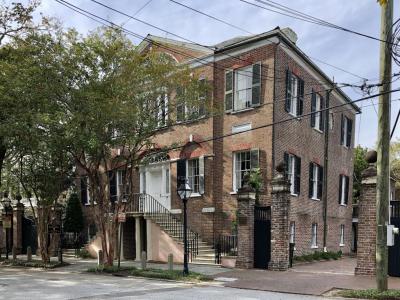 The historic Blacklock House is set on the southern edge of the College of Charleston campus in central Charleston, on the north side of Bull Street. A two-story brick structure set on a high brick basement, it is one of the nation's finest examples of Adamesque architecture, sharing similarities with the work of Gabriel Manigault, though no attribution has ever been confirmed. It underwent a major restoration in 1937, was declared a National Historic Landmark in 1973, and was acquired by the College of Charleston in 1974, now housing its Office of Alumni Relations. The property additionally includes two outbuildings, each of which have Gothic Revival features.
Image by Warren LeMay on Flickr under Creative Commons License.