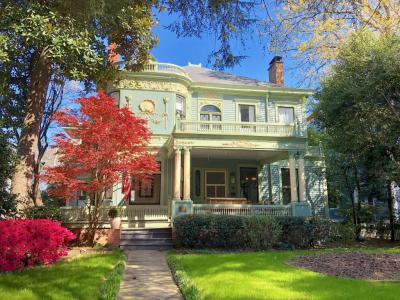 Built in 1891 by William Perrin Nicolson as a wedding present for his bride, Carolyn Crane, this house in Midtown Atlanta was designed by regionally renowned master architect Walter T. Downing and is a beautiful example of the Eclectic Colonial Revival style. Downing designed many public buildings and churches, such as Sacred Heart Church (1877–98) but his most unusual and impressive works were his residential designs where his eclectic and individualistic style shines through.

The house was listed on the National Register of Historic Places in 1977, and is a City of Atlanta Landmark Building and Site (1989). One reason for its listing is that it is now a relatively rare surviving example of W.T. Downing's residential work, being one of only five of his houses in Atlanta still extant, and it is the only one reflecting the distinctive style that he developed in his designs commissioned in the 1890s.

The house is part of Midtown Historic District, which includes most of Midtown east of Piedmont Avenue and is noted for its bungalows and Queen Anne style houses.
Image by Warren LeMay on Flickr under Creative Commons License.