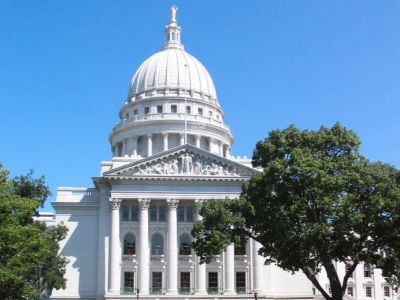 The first capitol was a prefabricated wood-frame council house without heat or water that had been sent hastily to Belmont. Legislators met there for 42 days after Belmont was designated the capital of Wisconsin Territory. The session chose Madison as the site of the capitol, and Burlington, Iowa as the site of further legislative sessions until Madison could be ready. The council house and an associated lodging house still stand and are operated by the Wisconsin Historical Society as the First Capitol Historic Site. The second capitol was constructed during 1837 in Madison of stone cut from Maple Bluff and oak cut locally. Located on the site of the present capitol, it was a small but typical frontier capitol that cost $60,000 to build. Growing government needs forced the state to construct a new capitol, also on the site of the present capitol. This structure, with a similar U.S. Capitol-inspired dome, was built between 1857 and 1869. During 1882, it was expanded at a cost of $900,000, with two wings to the north and south. During 1903, however, a commission began researching replacement of the structure.

On the night of February 26, 1904, a gas jet ignited a newly-varnished ceiling in the third capitol building. Although the building had an advanced fire-fighting system, the nearby University of Wisconsin–Madison's reservoir which supplied the capitol was empty, allowing the fire to spread substantially before the switch to alternate city water supplies could be made. As a result, the entire structure, except the north wing, burned to the ground. Numerous records, books, and historical artifacts were lost, including the mount of Old Abe, a Civil War mascot. However, by the efforts of university students, much of the State Law Library was saved.

Construction of the present capitol building, the third in Madison, began during late 1906 and was completed during 1917.The architect was George B. Post & Sons from New York. Because of financial limitations and the need for immediate office space to house state government employees, the construction of the new building was extended over several years and emphasized building one wing at a time. The Capitol is 284 feet, 5 inches tall from the ground floor to the top of the statue on the dome, making the building 3 feet shorter than the nation's capitolin Washington D.C. The "Wisconsin" statue on the dome was sculpted during 1920 by Daniel Chester French of New York. Its left hand holds a globe with an eagle on it and her right arm is outstretched to symbolize the state motto, "Forward." It wears a helmet with the state animal, the badger, on top. It is made of hollow bronze covered with gold leaf.
Image by Dori on Wikimedia under Creative Commons License.
Sight description based on wikipedia