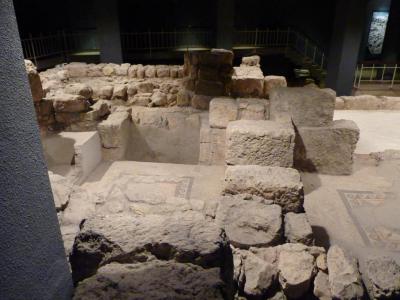 An impressive archaeological site within the Jewish Quarter, the Wohl Museum offers a glimpse at the remains – some very well preserved and all well presented – of six priests' mansions in an Upper City neighborhood destroyed by the Romans at the end of the Jewish Rebellion in 70 AD. At a time when Jerusalem was enjoying rising prosperity, this area – inhabited by affluent, aristocratic and priestly families – became one of the most desired living locations. The remains alone give one a good suggestion of the opulence of the buildings in their glory days, and a general perception of the art, culture, and day-to-day life of some of the city's more affluent citizens.

Descending from street level, you are able to walk on platforms above and within the excavation area. There are brochures, wall maps and general information to help understand what you are looking at. In addition to building foundations, there are surviving mosaic-tiled floors, frescoed wall fragments, elegantly carved stone furniture, and many ritual baths. All houses had an inner patio and cisterns to collect rain – the only source of water at the time; as for the thick ash layer covering the whole site, it is undoubtfully a mark of the devastating destruction caused by the Romans.

Suitable for families, lovers of history in general and of the Jewish people in particular; also a good way to stay cool on a hot day!