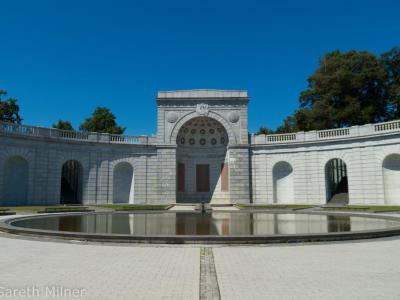 The Women in Military Service for America Memorial (WIMSA), or Women’s Memorial for short, is the only major national memorial established by the U.S. federal government to honor women who have served in and with the United States Armed Forces from the time of the American Revolution to the present.

The memorial is located at the western end of Memorial Avenue, at the main (ceremonial) entrance to Arlington National Cemetery, also known as the Memorial Gate. Originally called the Hemicycle, this structure was built in 1932. In 1988 the Hemicycle was approved as the site for WIMSA which was dedicated in 1997. A successful blend of Neoclassical and Modern styles, the memorial largely retained the Hemicycle itself, while adding a widely praised skylight on its terrace which incorporates not only memorials to servicewomen but also acts as a transition to the memorial below. It also houses a visitors center featuring special exhibits that change periodically.

Although women did not officially serve in the U.S. military until the 20th century, WIMSA pays tribute to all females whose devoted patriotism and bravery has become an integral part of America's national heritage, and ensures that their service to the country is never forgotten. For this goal, the on-site Education Center provides historic look at the women who have defended America throughout history including ladies in the 20th and 21st centuries who served both in and with the military in ever-expanding roles, as well as their forerunners in the earlier times of crisis. Photos of female veterans "then and now" show what they looked like while in service, as well as what they are doing today. Quite inspirational, this memorial is a symbol of gratitude from the nation.
Image Courtesy of Flickr and Gareth Milner.
Sight description based on Wikipedia.