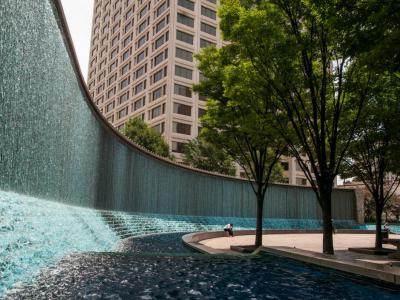 Woodruff Park, named for Robert W. Woodruff, is located in the heart of Downtown Atlanta, Georgia. The park's 6 acres (2.4 ha) are north of Edgewood Ave, between Peachtree Street NE and Park Place NE. The park includes two fountains, a performance pavilion, and several monuments. The original 4 acres (1.6 ha) were purchased anonymously by Mr. Woodruff then donated to the city in 1971 and the first incarnation of the park opened in 1973. During the lead up to the execution of Troy Davis, Woodruff Park served as a rallying point for marches and rallies for his life and freedom. The park is famous for the bronze sculpture known as The Phoenix. It depicts a woman releasing a phoenix, a symbol of Atlanta's rise from the ashes after being burnt to the ground by William T. Sherman's Union armies during the Civil War. Atlanta from the Ashes (The Phoenix) was a gift of the Rich Foundation in commemoration of the 100th anniversary of Rich's Department store. The sculpture was designed by James Seigler, sculpted by Gamba Quirino, and fabricated by Feruccia Vezzoni in 1969. It was originally located on a viaduct adjacent to the first Rich's Department store on Martin Luther King Jr. Drive. In 1995, the sculpture was restored and moved to its current location in Woodruff Park. Being a famous lunch time spot for locals as well as tourists, you can relax and have a nice time here.
Image by Scott Ehardt on Wikimedia under Creative Commons License.
Sight description based on wikipedia