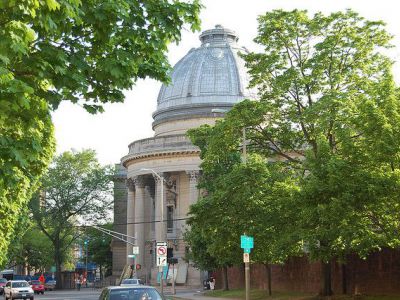 Woolsey Hall is the primary auditorium at Yale University. With approximately 2,650 seats, it is the university's largest auditorium and hosts concerts, performances, and university ceremonies including the annual freshman convocation, senior baccalaureate, and presidential inaugurations.

During the 19th century, Yale became one of the largest higher education institutions in the world, establishing seven graduate and professional schools in addition to the undergraduate college founded in 1701. Although Yale was nominally organized as a university in 1887, its constituent schools remained mostly independent of the university administration, and they lacked any shared facilities. In 1896, Yale President Timothy Dwight V proposed the construction of a central dining hall and auditorium.

Succeeding Battell Chapel as the university's largest assembly space, the new hall was the university's first secular auditorium, coinciding with Arthur Twining Hadley's appointment as the first non-ordained person to lead the university.
Image Courtesy of Flickr and Poldavo (Alex).
Sight description based on Wikipedia.