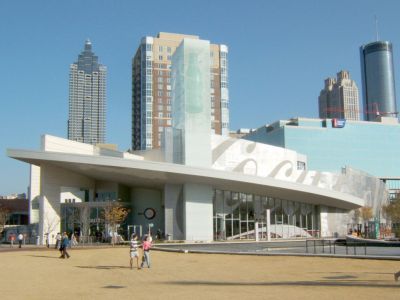 World of Coca-Cola, Atlanta (must see)

A classic Atlanta tourist destination, this place is well worth the admission and experience to see how much of an impact Coca-Cola have had on people's lives around the world. General admission for adults is $17, which is quite a good value since you will probably spend around 2 hours here exploring the different exhibits on two floors. Right as you enter, you are greeted with a free can of Coke, a short introduction by a guide about the company's historical artifacts, and a video – essentially a long Coca-Cola ad – which acts as a nice segway into the next portion – the entrance into the main hall.

On the 1st floor, you can explore "The Vault" (known to hold a physical copy of the secret Coca-Cola recipe), the "Milestones of Refreshment" walk-through exhibit, the manufacturing process in "Bottle Works", and even get to take pictures with the ever-jovial Polar Bear mascot. On the 2nd floor, there is the 4D theater with a wild roller-coaster feeling as the seats move to the short film, plus various galleries, massive gift shop, and of course the most exciting portion: the Tasting Room!

In the Tasting Room, you can sample over 100 different flavors of drinks from all over the world, produced under Coca-Cola license, as well as some drink specials from the bar. A very cool way to end the tour!

Why You Should Visit:
Tons of Coca-Cola paraphernalia and memorabilia, and you are given a virtually unlimited supply of Coca-Cola beverages from around the world to taste (naturally, you won't find any Pepsi drinks or merchandise here!).

Tip:
Try to book online or buy the City Pass to jump at least one or two queues for entrance.